A week gone? A horse gained?

Where did this week go? I knew it had been a few days since I had posted, but nearly a week?! I must've lost a few days in there somewhere. I don't post a lot about my horses and training here, but I figured I'd share this past week with anyone interested. 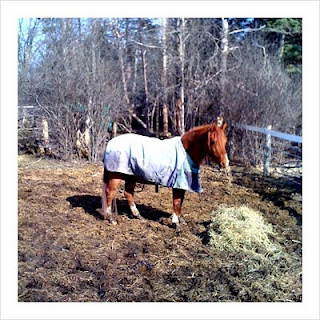 This week has been chock full of hard labor and exhausted evenings. Saturday was the first horse show at Constantine Farms where I keep my lesson program and, as I'm the one running the shows this year, you can imagine I was pretty exhausted afterward. With the arrival of one of our trailered in horse-show participants came the arrival of my new-old project horse, Esme. She has been on pasture board at a friends' barn for the past year and a half and has had more than a year off of work due to her "special" tantrums.

Her special tantrums included some pretty intense rears and in running a horseback riding lesson program it's pretty important that your school horses don't scare kids away from the sport. I decided to try to sell her, and when that failed, I just let her sit up at the friends' farm with her buddies, eating high-quality hay, getting fat and enjoying life. Ah well.

This past month, however, I decided 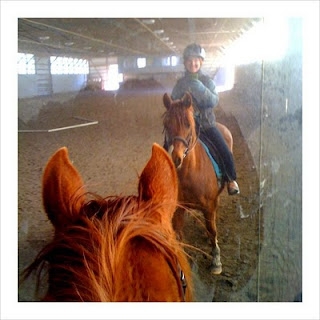 to give her another go. She's too fat to rear anyway, so my goal is to condition her to overcome (work through) her tantrums before she's lost enough weight to rear again. Haha. Sounds like crazy talk, I know, but so far so good!

I have had three successful rides on Esme at this point, and in each one I could feel her tense for a tantrum and then (like The Incredible Hulk trying to calm himself) think through things until she was calm again. Gosh I hope she keeps this up. She has some of the flashiest movement of any of my horses and I long to show her in dressage, but it's really her call when it comes down to it.

When I had her working in lessons a few years ago she was really a nice horse. She was sweet, attentive and only a little speedy. She jumped, was working on second level movements in dressage... essentially she was a great little pony, 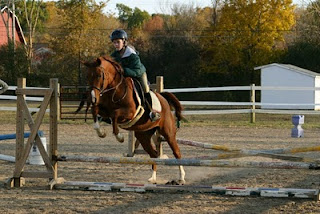 but I always felt like there was a connection missing that I had with my other horses. She rarely looked to me for guidance, and in a pinch she always resorted to her own means of navigating problems. If you're riding a horse and it makes it's own decisions in a tight spot, you may as well be riding a runaway train. They're living creatures which is part of what makes the sport so fun, but it's also what makes it so challenging and dangerous. If Esme would just admit that maaaaaaybe the humans are onto something and maaaaaaybe she should try looking to them for guidance when she's nervous, she would be a fantastic riding horse. I've seen glimpses of that attitude this week, so my hopes are high.

Wish me luck!
Posted by Emily Jenkins at 5:07 AM