In the kitchen: black currant and wild european blackberry sauce

(Sorry to double post this - it began as an accident but I figured I'd leave this up here in case you wanted to follow what I'm doing in my bakery kitchen this morning. Visit http://tanglewoodbakery.blogspot.com for more posts!)

Today I'm mixing up several cookie doughs and other sweets but what I am most excited about are the fillings for my tartlets.

This week's tartlets will be extra special as I'll be cooking down a rich and earthy fruit paste made from local black currants and locally foraged wild blackberries (European variety, naturalized).

I expect these to be super flavorful with hints of summer wines. I may yet put them over a chocolate or other base when they're in their final tartlet form. I'm hoping for now that they'll stand alone just fine, as I expect them to. 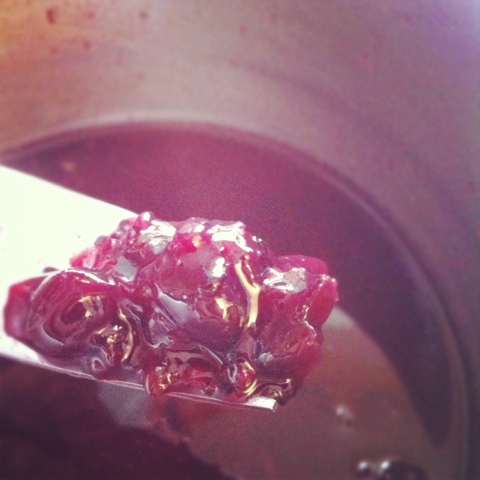 Posted by Emily Jenkins at 7:53 AM 0 comments

No sap flow today, but I've got half my spiles in and waiting! 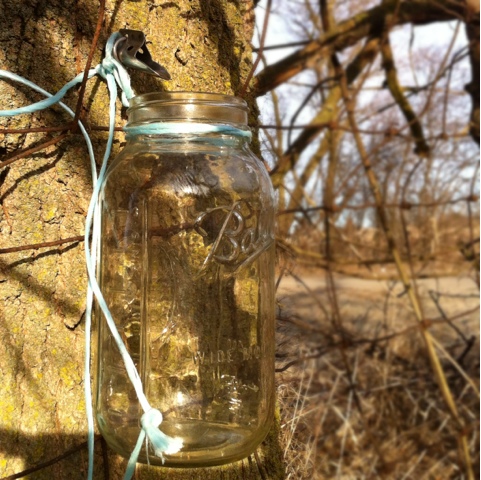 I have been so berry busy..

I was going to apologize for the title of this post, but... nah.

Well folks, it's been a while, and as a consequence I realize I've lost some readers which is a huge bummer... but, but, but! I've been so busy! I go through phases of extreme mania this time of year any time we get a break in the weather, and Michigan seems to be offering break after break after break. It's hard to sit still long enough to write a blog post, unless part of that sitting still involves the comatose collapse after overworking myself in the garden or at the horse farm. We got a dusting of snow the other day; really it was four inches or so, but the next day it was nearly 40º outside so I call it a dusting since it only stuck around for a few hours... 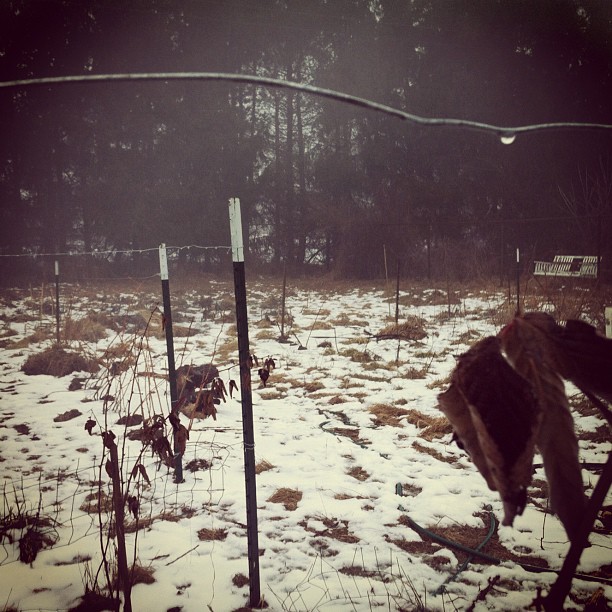 Those few hours of snow were kind of a blessing though because they provided me with an excuse to crash between manic activities. The photo above is of the preparations for our 2012 berry garden. I forget if I've posted on this yet, but I'll be harvesting from seven rows of mature red raspberry bushes (30 ft rows), two rows of mature purple raspberry and two shorter (15 ft) rows of mature blackberry bushes this year. In addition to these beauties, I'll be planting at least 20 new blackberries, 24 gooseberries and 24 currants, in various varieties. This doesn't even begin to touch on the strawberries I have plans for! 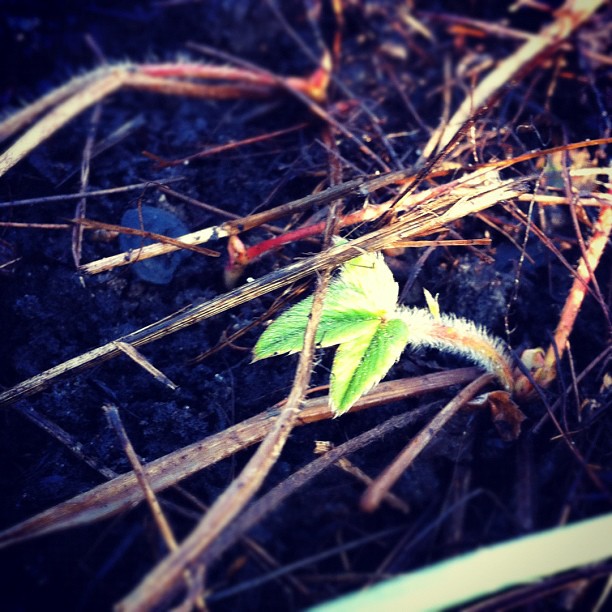 While it was warm enough to melt the top few inches of snow this week I was able to get some belated weeding done. We have a serious problem with perennial turf grasses sneaking into raised beds. Ugh, what a drag. We are also plagued by catnip and creeping charlie, or ground ivy (which I find so satisfying to pull out by the arm load, so that's alright!) While weeding, I couldn't help but smile happily at the itty bitty wild strawberry (Fragaria virginiana) leaves I would find popping up here and there. They are incredibly hardy, but I still tucked them back into bed after I weeded, under some leaves and straw, just in case.
So if you haven't already picked on it, I feel I should point out that I've finally embraced my love for all things fruit and I've decided to replace many of the less desirable points of landscape around our place with fruiting plants. I will still vegetable garden, totally, but I will keep my veggies a little lower key this year, planting primarily things I can direct sow or let self seed. I want my veggies to be a little more... liberated. I'll be interplanting certain semi-shade-tolerant veggies with the berry patches and i'll still have a handful of raised beds designated for them, but I've given myself over to the siren that is fruit gardening, mostly perennial fruit. I've also made plans to convert my cutting green gardens to covered european melon beds, with strawberries interplanted beneath the slanted panels (they'll get crowded out of their sunlight, but not until after their June fruiting season when the melons really take off... at least that's my hope.)
(On a side note, I've recently applied to a government germplasm bank to receive tissue samples of some incredibly old Frageria x ananassa cultivars to use in some kinda geeky research that I'd like to do involving historical vs modern gardening techniques and the antique strawberry - one of these varieties is even documented as being bred at the turn of the 18th century! I will keep you posted on this - even if I don't receive the tissue samples, I have found a few resources for 19th century varieties that I can use.) 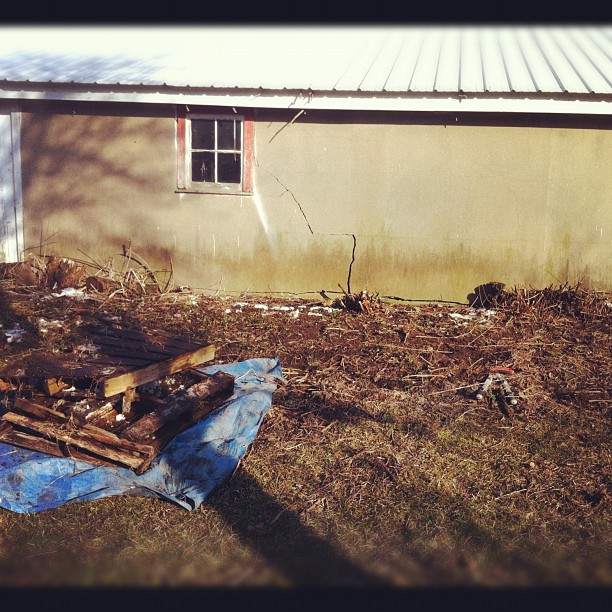 Another aspect of my yard that I've decided to dominate with fruit-bearing plants is the West-facing wall that runs behind the long garage. We don't actually have use of the garage; it's used to store golf course maintenance equipment, but I contacted our land lady (who has GOT to be the best land lady ever... and I don't even think she reads this blog so I'm not sucking up here) and she gave me permission to plant espaliered fruits along that wall! I've always wanted to train fruits to a wall, and this wall almost creates a Victorian courtyard feel to our yard, which I really enjoy and want to embrace.
Yesterday I spent hours clearing the wall. It was plagued by some of the largest multiflora rosa bushes I have ever seen (with canes literally three inches thick!) and the image above seriously shows about half of the length of the wall I cleared. The bushes were huge! You can kind of make out the break in the grass (by the loppers) that shows how far they extended into the yard. I also cleared out years of junk that had been tossed behind those bushes, before our time. There were pallets, logs, old industrial wire, plastic... all SORTS of stuff! I threw away the garbage and dragged the rest of it to the windbreak of pines we have at the West side of the yard where I used it to close a few holes in the existing brush where the ducks like to scramble through to the other side of the old fencing. 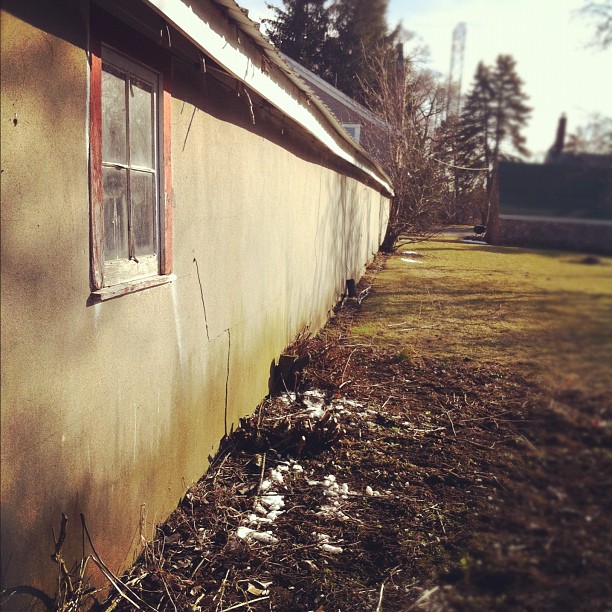 This is a photo that shows the finished wall. I left an adolescent crabapple tree down at the far end because it provides some awesome crabapples that I like to use for canning and we have a pair of orioles that occasionally nest in it in spring. Apart from that, with a bit more work on the existing stumps, this wall will be the new home to three fan-trained blackberry bushes (maybe five if I can clear out behind my raised beds), two fanned cherries, two espaliered pears and two fanned apricots. (I know apricots are impossible to grow, but I'm hoping that by keeping them against the west wall they will flower later and thus be sheltered from late frosts... hoping). I want to avoid growing many pears and apples because the several antique cousins looming over the property harbor a lot of disease that would make it inevitable that they would struggle. I may give in, though, especially if I find them cheap! I've got all sorts of walls I can train plants to on my house, too! LOL.
So yes, I haven't been blogging, but I've been doing so much more! Learning about espalier and prepping for spring has been keeping me very busy. What have you been up to, readers? Anything to prep for the impending spring?
Posted by Emily Jenkins at 5:19 AM 1 comments

We've been enjoying the strangest weather here at Tanglewood. This week has offered two days hovering in the mid-to-high 50's, and the rest of the week has been and will be in the 40's. My usual February activities are almost exclusively house-bound, apart from the occasional slogging of hot water to the barn if the hydrant has frozen again. 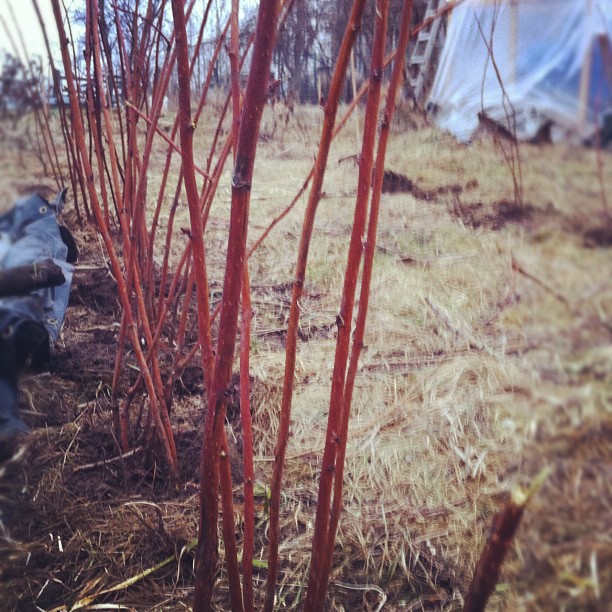 Last year on this very date we were recovering from a snow storm that dumped feet of snow on us; I had to climb fences to get to my horses, as the gates wouldn't open in the deep snow. This year is in stark contrast, as yesterday I spent almost my entire day in a sweatshirt and muck boots, dividing berry bushes and digging holes for the 87 berry plants I've just ordered (Yikes. That number looks bigger when I type it here...)


Today I intend to spend my time doing the same, taking a break in the mid-day to grab lunch with my brother and then slogging out to tap some Box Elder trees in the hopes that this year produces at least a little sap run despite the bizarre weather. 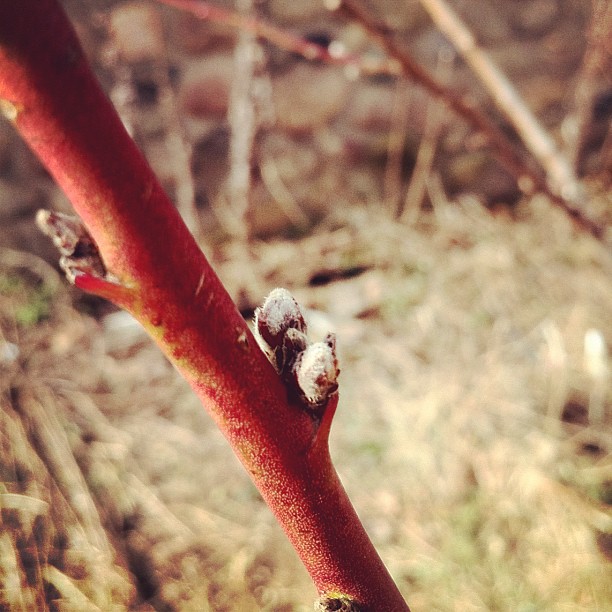 The crazy thing is, things are actually starting to break hibernation in this heat wave! The peach tree buds have the tiniest bit of swell to them that, if I hadn't inspected them closely last week, I would never have noticed. I have to wonder how this is going to affect our fruit production state-wide, this year. I can't imagine it's going to be good. 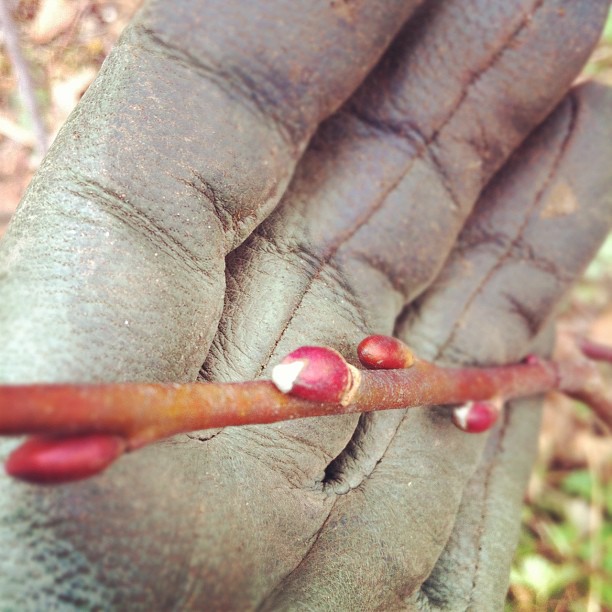 Crazier still, when I went outside yesterday morning and checked the pussy willows, they were tightly closed, the buds showing only minimal swelling. By noon, however, six of them had begun to swell so much that they were bursting open! This weather is strange, indeed.
Are you experiencing unseasonably warm temperatures where you live? How are the plants and animals taking it?
(Also, has anybody ever tapped Box Elder trees? I just learned that they produce a delicious sap for syrup and our place is literally plagued by them!)

Posted by Emily Jenkins at 5:58 AM 3 comments