From the Kitchen: Pan-fried Duck Fat Fries for wusses like me who are afraid of deep frying

I don't think there is much on earth that is as simply tasteful as duck fat fries, except perhaps when you sprinkle a bit of truffle-infused salt on said fries.
There is a crispness to them that doesn't come from pan frying in vegetable-based oils, or even from frying in other animal fats. It's divine. Imagine the way a pie crust made with shortening compares to one made with lard. That, my friends, is the amount of better-ness you'll find in duck fat fries. (Yes, better-ness is a made up word. Is there a word for made up words? There should be. Someone should make one up!)
So, when I was wandering around the Ann Arbor farmers market this past Wednesday it suddenly hit me. I needed to make my own duck fat fries! I snatched up some nameless potatoes that ended up being a bit buttery in texture and headed home, determined to make it work. 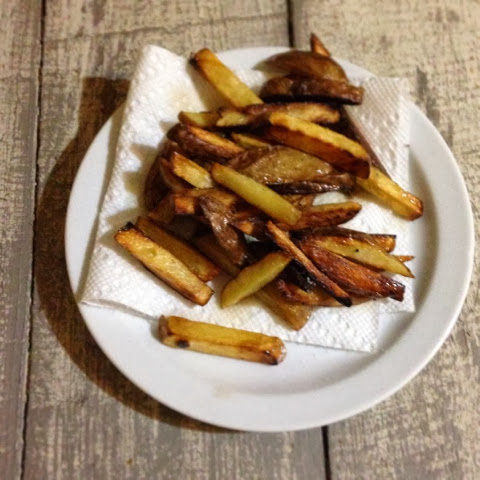 Now, when I looked for recipes for these babies I found lots of different ones. Some said to deep fry them, but I have yet to cross that (scary, scary) bridge so I was looking for a pan-fried version. I found several that suggested various techniques but every one had time consuming steps and I wanted them omgASAP so eventually I decided to just experiment. (This would later work to my advantage because I could munch on my failed experiments while I attempted new, less-faily methods - again, a made up word.)
For my first batch, I just sliced fries and tossed them in the pan with some fat and crossed my fingers. They took forever to cook (ah, duh...) and ended up very dark and oily.
The second batch, however, was perfect (if I do say so myself)! I precut the fries, tossed them in a bowl and microwaved them for 60-120 seconds on high. This kind of pre-cooked the potatoes. I assumed this was going to make them super fragile, but they weren't too hard to manage.
I turned the stove to medium-high heat and then tossed these into the pan with the hot, melted duck fat (you can get duck fat at some specialty grocers and butcher shops, did I mention? Or render your own - I'll post about this in a couple weeks when I take a few of the mature farm ducks to freezer camp) and let the fries sit for a few minutes before disturbing. As they develop a light brown crust, move them around the pan. 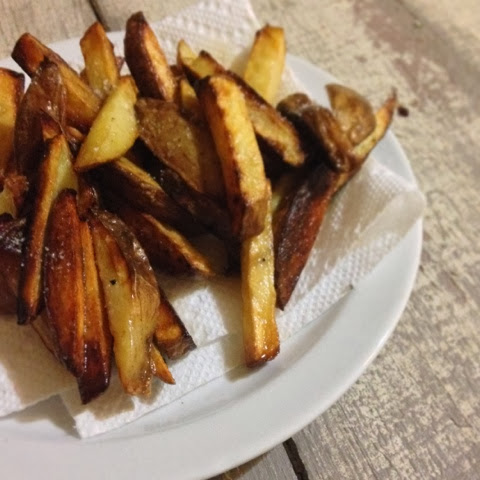 When they're finished, simply pull them out and place them on something to absorb the excess oil. As they drain, sprinkle them with your favorite salt. The flavor imparted by the duck fat is deep and earthy (an almost terroir effect) but it remains neutral enough to showcase a special salt if you have one. I am a huge fan of truffle salt, and the deep musky mushroom flavor compliments the existing flavor seamlessly.
You can then pour off the excess fat into a heat-resistant container to use again! Or, if you've used an iron pan, you can leave a bit of oil in there to sit if you plan to use your pan again soon. I have yet to have duck fat go rancid on me, and it should be relatively stable as long as there isn't a bunch of potato crud in your pan. I'll be making eggs in that mess for breakfast!
Anyway, these fries ended up just as delicious and crispy as the fries we've had at restaurants that have been deep fried in fat, but this method is quick and easy for a deep-fry-fearer like myself!
Do you have a favorite animal fat to use in cooking?
Posted by Emily Jenkins at 4:48 AM