Today we'll be driving across the state to pick up our ram from our friends' farm in Olivet. He's be staying there because we didn't breed last year (due to the England trip) and we didn't want any accidents. In fact, the day they came to pick him up for us I watched him jump a four-foot tall fence (granted it wasn't tensioned well) to escape being caught! Rams are... special.

Anyway, he'll be spending some time down in the brambly new pasture I just finished fencing and then in December he (as well as one other possible loaner ram) will get to finally spend some time with the ladies. I'm sure he'll be relieved. I'm hoping the ample grass and raspberry leaves will keep him occupied for now, so that he restrains himself from hopping any fences. At least if he gets out, I know where he'll go! The ewes haven't seen a boy in almost a year so I'm sure they'll be torturing him fairly regularly until it's his time. Poor lad. 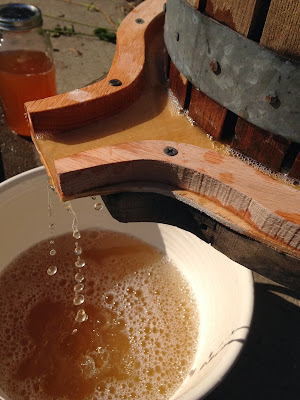 Before that, however, I plan to make the last two batches of apple cider from the apples that I gleaned from my student's house. Their apples have been spectacular so far, and I can't wait to surprise them with a big jar of home-pressed apple cider next time I see them!

My cider press is an antique press made in Lansing, Michigan. It has a pressed-tin label on it, but thus far I haven't been able to find any information on the company that made it. Ah well. I made a new platform to sit atop the old one since the old one was pretty grungy. I know presses are supposed to have a certain amount of grunge to them, but this one sat unused for several years and I just don't know what kind of moldspore it's been exposed to. Anyway, you can see my awesomely lame carpentry skills in the photo. I have all sorts of improvements planned for next year's press, but I at least wanted to use it this season before getting into all of that. 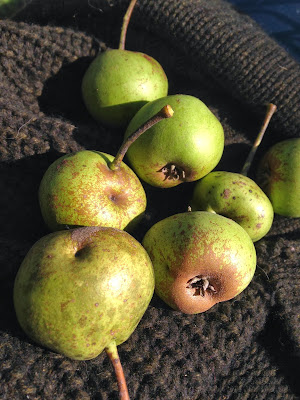 So far I've pressed nearly eight gallons of apple cider, and an additional three of pear. The pear cider turned out amazingly, thanks to the bitter/sour wild pears I found a week or so back.

These "perry" pears added tannin and tart flavor to the pear cider to keep it from becoming too syrupy sweet. The pears I was using were awfully soft, as well, so I got to experiment with using hard fruits and soft fruits together to create "channels" between bits of pomace to allow for cider to flow. All in all, I got a nice dry cheese at the end and the cider was/is delicious!

I've been canning it to keep it for the winter. I can't wait to crack it open in the winter doldrums for some nice hot, spiced cider! YUM!

Posted by Emily Jenkins at 6:17 AM