I've decided I'm going to go back to my now-deceased Seven Magpies group blog and pick some of my favorite posts to share. I'd like to condense my multiple blogs into one place (feeling a bit like my failure to blog is the fact that I've been spread too thin), so I'll be cross-posting old entries from my other blogs here in an effort to bring all of my favorite things to one place! 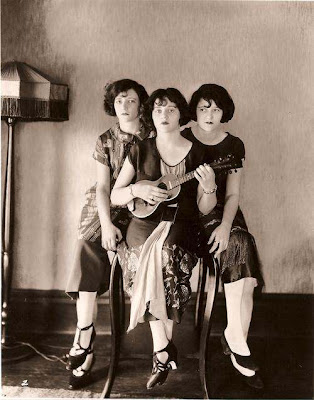 The Boswell Sisters formed in 1925 as a three-sister singing group from New Orleans, and their jazzy complex harmonies were a local sensation for half a decade before they moved to New York City in 1930. After they moved to the Big Apple things really took off for them and they began recording for Brunswick Records.

The three sisters were very actively traveling the USA for shows during the second World War but unfortunately not allowed to visit bases over seas for foreign troop rallying and whatnot due to an unfortunate childhood accident that left the middle sister, Connie, paralyzed and wheelchair bound.

This is a streaming version of "When I Feel Lonely" which is very snappy and was the first song the sisters recorded back in 1925! You can find loads more like this at Archive.org which offers public domain music streaming and downloads. It's a great website!

This is another of their popular songs, from later in their career. I love the way they bop as they sing!

If you have time, this is a nine minute short called "Close Farmony" which is a seriously amazing (albeit mildly bizarre) film about how jazz music saves the farm! The sisters and the farm hand spend the film serenading farm animals, trying to encourage them to produce more milk and eggs.  It's hilarious! The best part is the piano covered in hay.

Posted by Emily Jenkins at 6:58 AM