This morning while sitting on my porch this morning, listening to our quail cock call with his adorable raspy voice, I glanced outside to see my dogs lying in the yard, both carefully oriented so that they could watch me with little effort. It suddenly occurred to me (and overwhelmed me a bit) how dreadfully I take our dogs for granted. They are always present while I'm outside, and even when they find the urge to explore they always check in every ten minutes or so just to see what I'm doing. 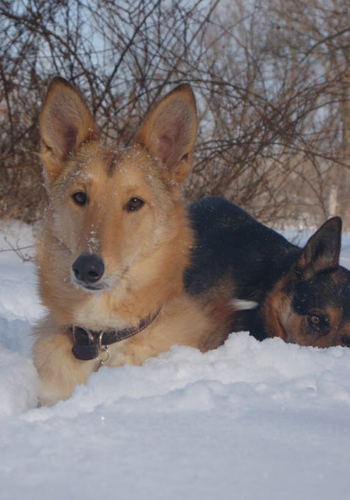 Connor and Basil, February 2011, pictured above.
We have two dogs living with us. Connor, our runty German Shepherd, is roughly seven years old. I adopted him from a rescue in Flint, MI between my junior and senior years of college and he is the most amazing dog I've ever met. He has an amazing ability to pick key words out of complete sentences, and to read body language and voice inflection, such that I can talk to him like I would a human. I'm not kidding. This morning I told him "Hey! I really want you to stay on the porch this morning instead of muddying up the house..." and he came back onto the porch from the house and lay at my feet. He helps me round up the ducks and the sheep and knows several herding commands. 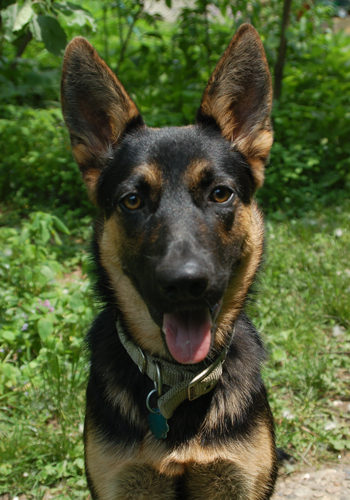 This is Connor's first puppy photo, the day after I brought him home.
The other dog we share our home with is Basil. She also came from a rescue and was considerably damaged when we brought her home. She came from out of state (one of the Carolinas I believe) and the regulations on the shelters and pounds there are nauseating. She had been kept in a "kill room" which I understand to be a room that they stuff all of the random dogs and cats slated for euthanasia. The only state requirement for these rooms is that the animals be provided with water. The person who euthanizes the animals comes once a week and poor Basil spent three days in this room before she was rescued by a collie rescue from Ohio. They pulled Basil and her four siblings from the shelter and placed them in foster care as quickly as possible, but a lot of damage had been done. Her foster mom had been great at keeping her healthy, but she had also allowed her to hide under the end table most of the time and catered to Basil's neurotic behaviours so she had no reason to learn to adapt. 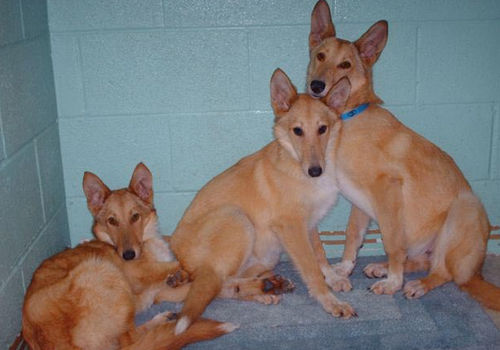 Basil is the little one in the middle.
When we brought her home she would hide in any corner she could fine. We effectively made our living room round with the aid of sheets of cardboard and we forced her (literally clawing and crying) out from any hiding spot she found. We literally forced her to be our friend, and I can still remember slumping down after a long day, head in hands, wondering if this had been a huge mistake. I like a challenge, but I can't stand neurotic dogs. 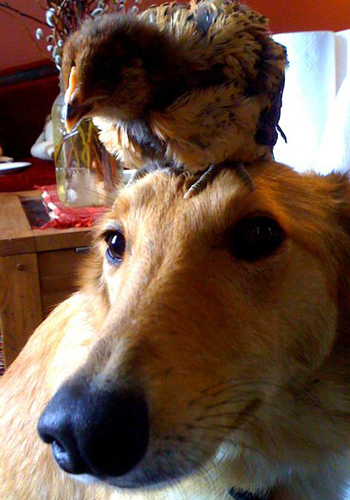 Basil is such a patient dog, and has calmed down a great deal since we brought her home.
Now, two years later, Basil is a totally normal (if slightly hyperactive) dog when she's around us. She still gets squeaky and nervous around new people, but she is proving to be a wonderful companion and she loves to cuddle (where Connor is above the notion). She is the silly to Connor's serious. They compliment each other perfectly. 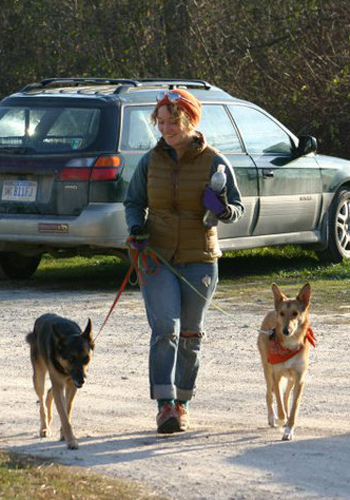 Can you tell I like skinny-built dogs with pointy ears? :)
These two buddies of mine follow me around the yard, happily wagging their tails when I toss them weeds to shred, chasing imaginary squirrels when I point up at the trees, breaking up fighting drakes and getting head butted by ornery ewes. They are amazing guard dogs and I have watched them launch after scouting coyotes with a terrifying fervor that any predator would think twice about invoking twice. They keep the bunnies from my veggies and the raccoons from my chickens. I  don't know what I would do without them, and now that I've really thought about it I don't think I'll ever take them for granted again. My farm would be a disaster without them!

Do you have any four-legged or feathered companions in your life that you just couldn't do without? Do they help you in your day-to-day activities?
Posted by Emily Jenkins at 6:29 AM

Email ThisBlogThis!Share to TwitterShare to FacebookShare to Pinterest
Labels: dogs